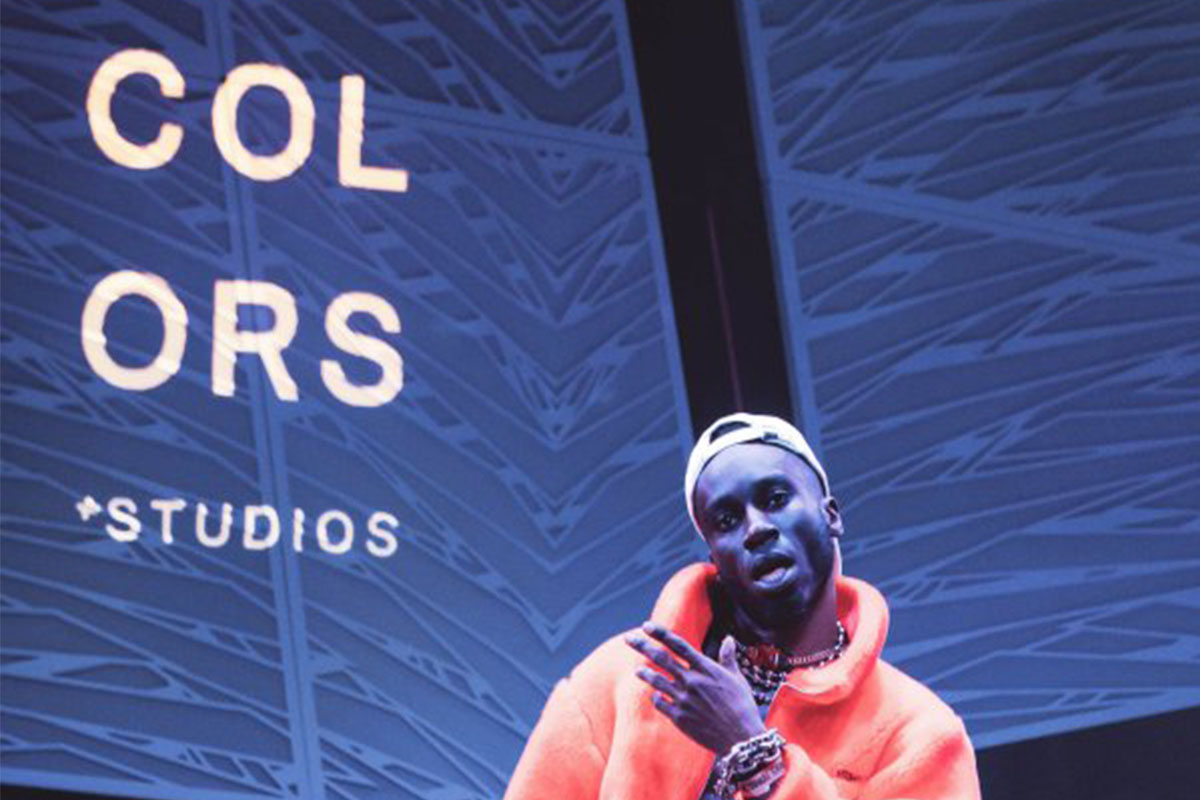 You’ve probably seen the videos circulating around everywhere from Instagram to Twitter: a favorite new artist or an unfamiliar one standing in front of a colored wall, a microphone suspended from the ceiling. Sometimes the wall is purple, sometimes it’s orange or white, and oftentimes, it’s matching the artist. You’ve reached COLORSxSTUDIOS, reinventing online music sessions one Youtube video at a time.

About twice a week, COLORS (created by Phillipp Starcke and Felix Glasmeyer) releases a new Youtube video of an artist-on-the-rise performing live from their Berlin studio. What viewers see is a raw, acoustic version of the freshest talent, splayed up against a monochromatic wall and singing that track. You know the track, the one you may have heard a month or two ago and haven’t been able to get out of your head since. That’s what COLORSxSTUDIOS does - brings you the next viral song, the next fresh artist, your next musical obsession. If you’re into music curation, COLORS has most likely been on your radar for some time now.

Since COLORS started in 2016, you’ve probably caught Jorja Smith, Parcels, Doja Cat, Mac DeMarco, Gunna, Daniel Caesar, Masego, or even Alicia Keys with nothing but their voice on display. Without the boys behind COLORS, you may never have come across Mahalia, GoldLink, or even Billie Eilish - who gave these artists a digital breakthrough. The refreshing simplicity of COLORSxSTUDIO’s aesthetic is not only auditory but also visual, and with it brings a whole new layer of depth to the track.

Following in the digital footsteps of popular Youtube channels NPR’s Tiny Desk and Triple J’s Like a Version, COLORS is a new way to look at a dizzying array of fresh, diverse artists or if you’re lucky enough, a long-time favorite. Its Youtube platform suspends the mainstream appeal of the previously listed channels; their outsider mentality is on purpose. Starcke and Glasmeyer, with previously no connections in the music industry, used their vision of a soft-yet-pristine, dreamy simplicity to cut through the oversaturated noise of the current music discovery sphere: social media, Spotify’s algorithm, and whatever song has gone viral on TikTok. Since 2016, COLORS has been about giving new voices worth discovering a stage of their own on which to perform - or in this case, a color.

Becoming some of the music industry’s most trusted voices of authenticity must not have been easy for Starcke and Glasmeyer, but the pair have remained humbly and even purposefully elusive in their success. Shrouding all of their production and booking efforts in complete mystery brings the public focus into only what they want their viewers to see. But 2018 brought the addition of a new Creative Director (Jonas Weber) who is behind thirdculture, an investment firm with their eyes on digital tastemaker projects like COLORSxSTUDIO. It’s hard to imagine what goals the collaboration may have in store that COLORS hasn’t already surpassed - but if it’s anything like the past six years with Starcke and Glasmeyer behind the camera, we truly have no idea what’s next. And maybe that’s the way it should be.

COLORS’ uniquely minimal lens has proven that the music video is not dead, it’s simply transformed to fit the aesthetic-driven digital age. In November we saw COLORS transcend its digital platform into a live one in New York City; two cult-favorite venues’ marquees listed up-and-coming names like Dua Saleh to completely full crowds. Their small, original studio that Starcke and Glasmeyer used to hand paint themselves in between sessions was brilliantly upgraded to reflect how far the pair have come. COLORS’ Youtube subscribers count well into the millions, even surpassing NPR’s Tiny Desk. With hundreds of videos to get lost in, it’s easy to find yourself falling in love with a new sound, a new genre, or your next new favorite artist.